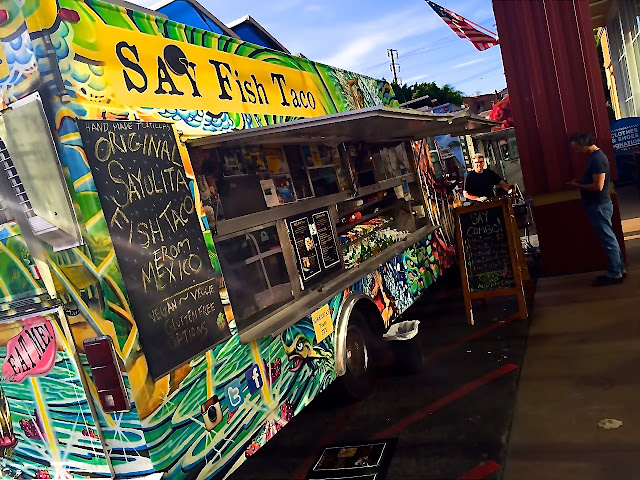 So it's week 3 as a Californian, and I have yet to get food out of a truck. So tonight I went to Fresco Market in the Monterey Hills, and there they were!
I forgot it was Monday, and they have food trucks there every Monday night from 5:30 until 9:30.
I was there to buy stuff to make a salad, but that plan side tracked quickly.
Out of the 3 trucks that were there I chose the truck with the fish tacos. Only because out of the options, that's what I wanted.
I read the menu and decided to go for what seemed to be their most popular dish. It's called a "Sayulita Fish Taco" It's fish, deep fried in an old school dark beer batter, original SFT sauce, shredded cabbage, salsa, and a homemade corn tortilla.
And I got the combo, so it came with fries :)
Not as healthy as the salad I was going to make, but it was only 6pm, so it's early enough to have a little fired fish.
Anyway, let me just tell you that I wish I had ordered 5 of these tacos! 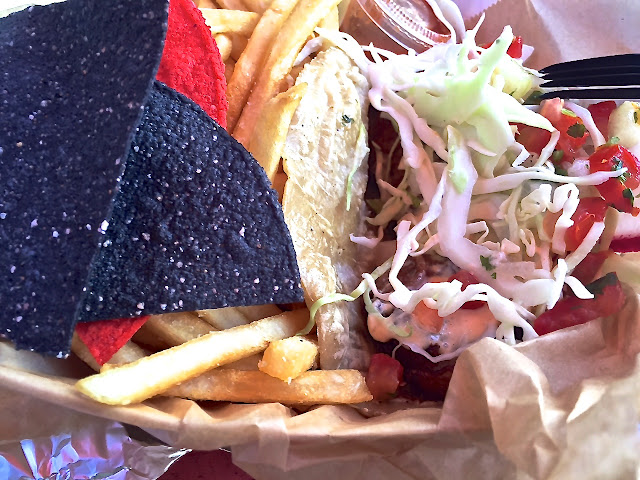 First lets talk about the sauce. It was the first thing that I tasted. I have no idea what it was. I wanna say it was mayo based, but could very well have been crema based. whatever it was, it gave me just the right amount of circle in my mouth to start eating this taco. Next to hit my tongue was the salsa. That was great too. Only a little heat, so there could be a little hot sauce added to this taco, but the salsa was good. Hoping that was homemade too.
Then the fish.... it was NOT greasy or weird like I've had on so many other fish tacos. It was light and fresh tasting, and the batter was delicious.
The cabbage added a great, and traditional crunch, but what really sealed the deal was the homemade tortilla!! Oh my gosh.. it's been a long time since I had a tortilla so perfect. It was soft, and flavorful. It didn't break apart, and wasn't super chewy either. I don't even really know how to explain it, but after the other great flavors of this taco, it just seemed perfect. 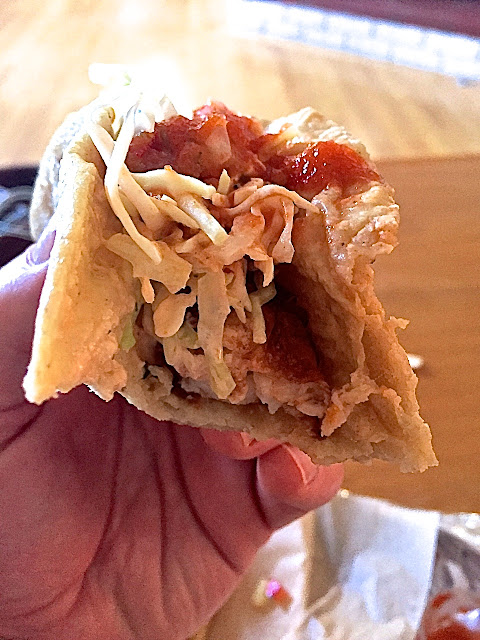 That's really all I can say about these tacos. I'm so happy that I decided to stop by the truck. I will definitely be back for more.. A lot more...

Actually there is something else I can say about the taco. And the fries for that matter. Even something to say about the way it was plated and wrapped up to go.
It really showed that these guys give a shit about what they are doing. There was love in the food, the platting, and the way they interacted with people.
Super well done guys! See you soon!

If any of you wanna check them out, here is a link with all their info including where they are going to be parked this week.
www.sayfishtaco.com

A few days ago P2 and I were waiting in line to check out at Whole Foods in Chelsea and we saw a jar of Coconut Oil. It looked like a jar of shortening. We picked it up because my brother Barry had told it it is really healthy, but it didn't seem like it at all. It's LOADED with saturated fat. Loaded with all kinds of fat. We were very confused as to why this would be a viable alternative to butter or other oils. My brother who told us this was healthy is a strict follower of The Paleo Diet.  This diet basically adheres to the way a caveman would eat. All natural of course with lots of meat and veg. Very low carb, no beans, or legumes, and no wheat. That's just a basic outline. The diet seems to be a bit on the fatty side, and I never understood it.  Most fat is bad right? And we all know saturated fat is the devil, right? One of the most common ingredient in this diet is Coconut Oil. It replaces things like butter an other oils to cook with. He showed it to me once but
Read more

So for a very long time I have done my best to stay away from eating pigs!! It all started when I first watched the movie "Babe". I fell in love with him, and decided to stop eating his friends! Over time I ended up becoming a " pescatarian ". That is a person who only eats vegetables and ocean creatures. That lasted about 8 years. Once I decided to wanted to go to culinary school I knew I would have to eat everything!!! And I did. But... I could never really get back to eating babes friends. Here and there, sure, but not full time! For some reason I like the bacon in Mexico, so if I find myself there.... it's all over! Last night I threw caution to the wind! I sucked it up in the name of the season, and I pan roasted the sickest pork chop ever!!! IT WAS SOOOO GOOD!!! I will tell you all about it: First I cubed about 3 sweet potatoes and baked them at 400 for about an hour. Salt, pepper, 2 tablespoons of canola oil and a secret splash of vanilla extr
Read more