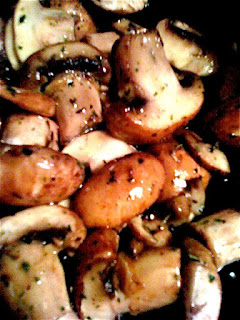 My day was crazy!! I was up at 5:45am, and off to work by 6:30am. It's my normal schedule and is the main reason why I don't eat breakfast too often. Today was one of those days. Wasn't worried though. The past few days were on the mellow side, so I knew I would have a chance to get some food sooner or later. I was WRONG! It was a crazy busy day and I did not get to eat. It wasn't until I got home at 5:15pm that I got the chance to eat. But what was I going to eat?? I opened the fridge and I saw mushroom. Then eggs. I have read so much about the egg scare going on and all it makes me want is eggs! So it was going to be eggs with sauteed mushrooms! I put oil in my pan with a little dried thyme. Once nice and hot I put my sliced mushrooms on the heat and let them cook down for a while so they were nice and soft and a little caramelized. After that I poured in my whisked eggs. I always put a little water in my eggs. Some people say milk is best, some say water. I am a
Post a Comment
Read more 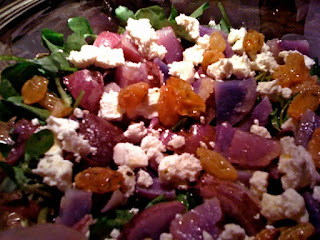 This Tuesday P2 and I decided to have a food challenge. Our deal was that we had $25 and 2 dishes to make. The catch was that we could not make anything that we usually make. Basically nothing that had ever been made in our kitchen. We agreed on those terms and headed off to Chelsea Market , separated, and gave each other 15 minutes to figure out what our 2 dishes would be. I had decided on a salad that was yet to be determined and seared Ahi Tuna with butter sage sauce. I have to admit that I have made that a bunch of times before, but never in OUR kitchen so it counted! But what would I do for a salad? I decided the greens would be Watercress, but what would be different to go with it. What I really wanted was beets, but that is not too much of a new idea. I wandered around the produce for a while and finally decided on purple potatoes! I would accompany those ingredients with goat cheese, and golden raisins. First I made the dressing. I choose my favorite one that I always use whi
Post a Comment
Read more
More posts