So for a very long time I have done my best to stay away from eating pigs!! It all started when I first watched the movie "Babe". I fell in love with him, and decided to stop eating his friends! Over time I ended up becoming a "pescatarian". That is a person who only eats vegetables and ocean creatures. That lasted about 8 years. Once I decided to wanted to go to culinary school I knew I would have to eat everything!!! And I did.

But... I could never really get back to eating babes friends. Here and there, sure, but not full time! For some reason I like the bacon in Mexico, so if I find myself there.... it's all over!


Last night I threw caution to the wind! I sucked it up in the name of the season, and I pan roasted the sickest pork chop ever!!! 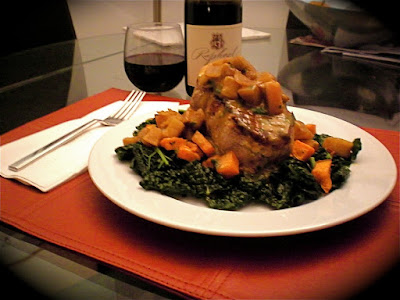 IT WAS SOOOO GOOD!!!

I will tell you all about it:

When the pork is done it should sit for about 10 minutes.

Now everything should be done and ready to plate!

First put some kale on the plate, then some sweet potatoes, then the pork chop, and then spoon on some apples!!

Don't forget to add some love and hit it all with parsley!!!

PS.. if you would like, put the pan that you cooked the pork in on a low/med flame. Add a heaping table spoon of flower and mix it around to create a rue. Once the flower has cooked a bit add a splash of red wine and then about 3/4 of a cup of the chicken stock. Whisk it all together and let it come to a boil. Once it has reduced a bit and thickened add some chopped parsley, a little salt and pepper, and you can pour this down over the whole dish before serving it!

Let me know how it works out!

SIRPAUL said…
Although I tend to be more of a fan of a thin pork chop, these chops were juicy and delicious! The apple/onion/sweet potatoe combo was OUTRAGEOUS!!! Love to love you baby!!!
Xoxo
October 30, 2009 at 2:40 PM

Roxiest said…
I am super jealous that at your casa, restaurant quality (even better) meals are served every single night!!!
November 1, 2009 at 6:56 PM

Patty said…
I tried the Autum Roast Pork and I passed with flying colors. Took me a little longer to put it all together, than I wanted but Mr. T. liked it but one chop wasn't enough for the big guy. Great dish, had the wine and served with LOVE xoxox
November 4, 2009 at 10:02 PM

Paul Salvatore Petersen said…
Thanks Patty!! Glad you and Tony are liking my food!!! I love that you let me know about it!!