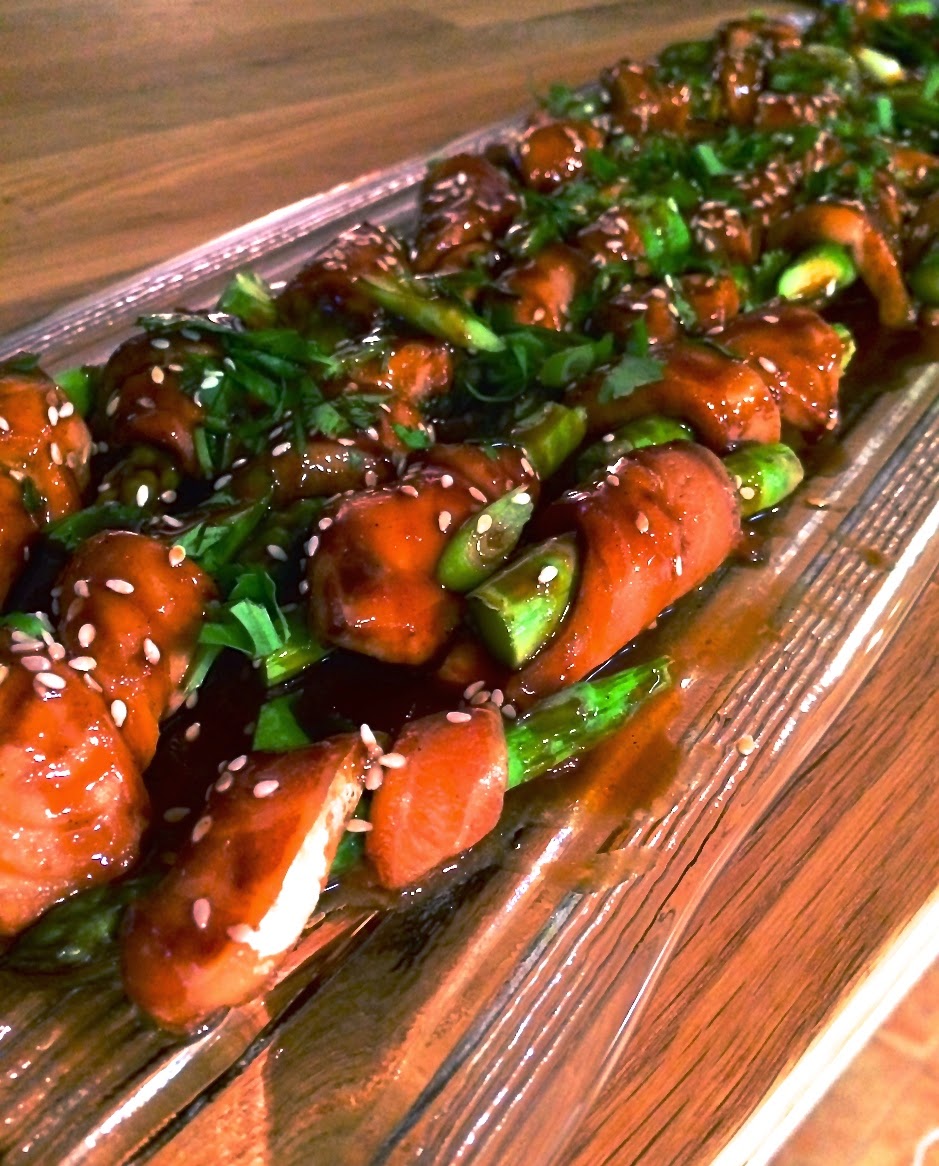 In the late 90's I moved to LA for a short time. I just needed to get out of Connecticut, where I grew up, and learn to be my own person. I was 20, and a little lost.
Luckily for me, I had a friend from home who also planned to be there for the summer to study art at UCLA. She planned to be there for 2 months, but to my happiness, she never left! So for the year that I lived there I had my friend Nicole with me for when I needed a friend.
Once when I needed her, she came through with a crazy easy, crazy cheap, and crazy good recipe for a cocktail party I somehow found myself hosting. She showed me how to make these crunchy bite sized pieces of Asparagus wrapped in soft, saltily, and sweet pieces of Salmon. They were a total hit, and the few times after that, that I made them, they were a hit too. Now fast forward about 15 years later.. I missed them. I wanted them, and I had a great opportunity to make them. The thing was I needed to figure out how to jazz them up a bit. I love simple, but since I learned them, I learned a lot about eating with your eyes!
When I first made them it was a 3 ingredients recipe. A Salmon fillet, a bunch of Asparagus, and a bottle of Teriyaki sauce. Now, it's pretty much the same, but I added a finishing glaze and some garnish. Here is what you'll need for the 2014 version!:

*A one pound Salmon fillet  - Skinless ( I know I've said to stop eating it in the past, but organic farming has come a long way since then)
*A bunch of Asparagus
*A bottle of Teriyaki sauce. Spend a little on a good one. (We use a gluten free brand because of P2's allergy)
*Honey
*Chinese Five Spice
*Sesame seeds
*Green Onion
*Cilantro
*Sriracha


Thinly slice the fillet of Salmon crossways then cut those slices in half.
Soak them in 1/4 of a bottle of teriyaki sauce.
Cut Asparagus spears in 2 or 3 pieces depending on their size and wrap them with the Salmon.Preheat your oven to 375.
While the oven is preheating put the remaining 3/4 of the teriyaki in a sauce pan with 3 table spoons of honey, a few pinches of Chinese five spice, and reduce it over medium low until it's reduced by half and/ or nice and thick. Cook the salmon and asparagus on a sheet pan for 7-10 minutes.When done, plate them, and drizzle liberally with the glaze. Garnish with sesame seeds, and chopped cilantro and green onion.
If you and your guests like a little spice, add a little bit of Sriracha to the glaze.

I promise totally success with this one. I didn't realize that I was making these the other day for a bunch of people who didn't like Salmon, but they loved it!!!
Please try these and let me know what you think!