Pavlova with Almond Cream and Berries 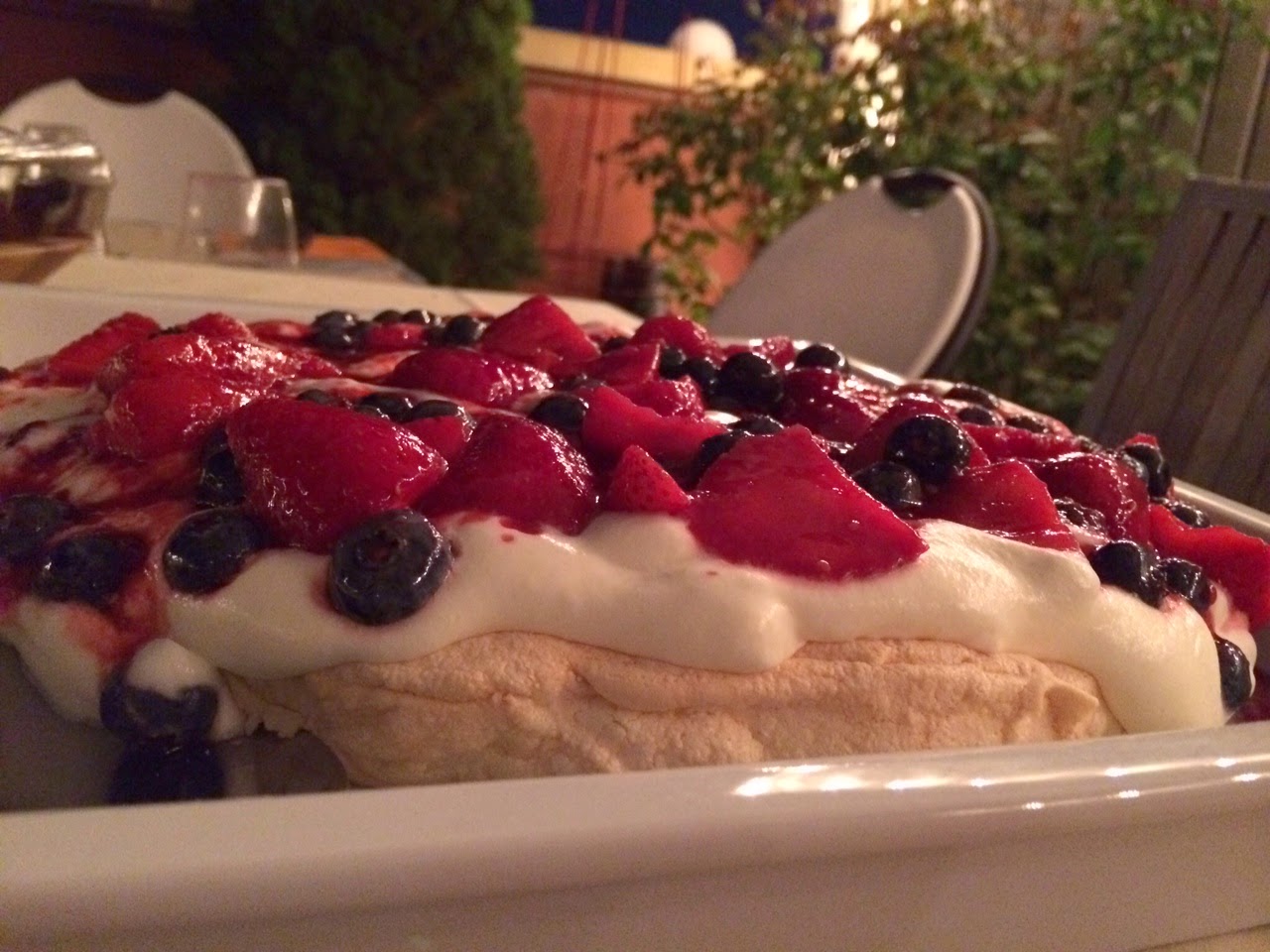 Last September while in Europe, we stayed at a good friends house just outside of London. It was a beautiful, old farm house. I fell in love as soon as we stepped in the door.
The house belonged to Andrew and his roommate Murray. Murray made us a wonderful roast Lamb dinner and a Pavlova for dessert.
We had never had Pavlova, nor had I ever even hard of it. But you know what? I fell in love with it even more than I loved the house!! What Murray had made was an amazing and prefect dessert for me. I rarely eat dessert because I am usually too full. I am way more a savory person, not a sweets kind of guy, so I tend to have seconds at dinner and leave no room for dessert.
A Pavlova however is a light and airy meringue that seems to usually be covered in whipped cream and fruit. Most people seem to think it was invented in New Zealand, so I think Kiwi is a popular choice for the fruit.
Murray went with berries, and so did I.
It took me a year to attempt this because I was afraid. I suck at baking and pretty much hate doing it. One reason I hate it so much is because you have to be perfect when you bake. The "no recipe, recipe" does not exist in backing. I live for no recipe cooking.
That being said, we were invited to a friend's house in Brooklyn for brunch, and we were asked to bring a dessert. Damn!!!
I know it would be super easy to run and buy something, but that's not my style, so this seemed like the right time to google Pavlova recipes, and break out the mix master. I failed miserably twice. Third time and a hybrid of 2 recipes later.... I had what I needed, and fell in love again!
It's a mix of The Barefoot Contessa's recipe and a recipe I found from another cooking site. What I did was follow the Contessa's recipe, but took a foolproof tip from the other site. Here it is:
Ingredients
4 extra-large egg whites, at room temperature
Pinch kosher salt
1 cup sugar
2 teaspoons cornstarch
1 teaspoon white wine vinegar
1/2 teaspoon pure vanilla extract
Directions
Preheat the oven to 180 degrees F.
Place a sheet of parchment paper on a sheet pan. Draw a 9-inch circle on the paper, using a 9-inch plate as a guide, then turn the paper over so the circle is on the reverse side. (This way you won't get a pencil mark on the meringue.)
Place the egg whites and salt in the bowl of an electric mixer fitted with a whisk attachment. Beat the egg whites on high speed until firm, about 1 minute. With the mixer still on high, slowly add the sugar and beat until it makes firm, shiny peaks, about 2 minutes.
Remove the bowl from the mixer, sift the cornstarch onto the beaten egg whites, add the vinegar and vanilla, and fold in lightly with a rubber spatula. Pile the meringue into the middle of the circle on the parchment paper and smooth it within the circle, making a rough disk.
Ina says to bake at 180 degrees, but 250 worked better for me. She also says to bake for 1.5 hours and let cool for one hour in the oven. The recipe below from http://www.essentialkids.com.au suggested letting it cool for 3 hours in the oven and that was perfect!
Also, http://www.essentialkids.com.au had this tip that made all the difference;
Bring 1/2 cup of water to the boil in a small saucepan. In a cup, mix the cornflour and vinegar together to create a slurry, then pour the slurry into the boiling water, stirring immediately to create a thick paste. Cook for a further minute, stirring constantly and remove from the heat.
When Ina says to add the corn starch and vinegar, add the slurry instead!
It came out perfect!!!

Sweetened Whipped Cream:Whip the cream in the bowl of an electric mixer fitted with a whisk attachment (you can also use a hand mixer). When it starts to thicken, add the sugar and vanilla and continue to beat until firm. Don't over beat!
Triple Raspberry Sauce:Place the raspberries, sugar and 1/4 cup water in a small saucepan. Bring to a boil, lower the heat, and simmer for 4 minutes. Pour the cooked raspberries, the jam, and framboise into the bowl of a food processor fitted with a steel blade and process until smooth. Chill.

The only thing that I did different was add a few dashes of Almond Extract when I whipped the cream.

It was amazing and about 4 minutes after my friends started eating it, it was gone. Like GONE!

So I know this is a confusing way for me to explain this, so I am here for you if you have any questions. But if you take your time it'll be great. If I can do this, I am sure you can do it, and do it even better than me!