October 09, 2012
Fall is here, and if you live in the North East like I do then you know that Apples are in season. Apples, Pumpkins, Cinnamon, and Corn are all over the place, so naturally I started to crave the comfort of Apple Pie. Well not really the pie but those soft, cinnamony Apples inside the pie. So that being said, I am happier with a crumble than a pie. Not to mention I hate to bake, so a crumble is much more my speed. 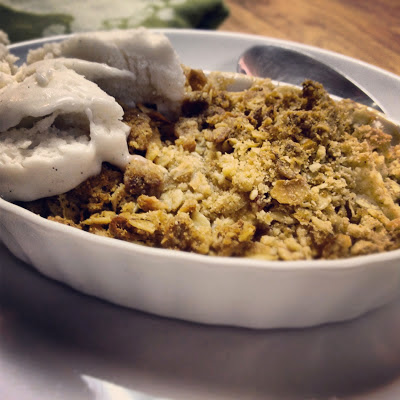 I fell victim to my cravings today, and the picture above shows that I have no regrets!
In the spirit of health I cut out the bad stuff because the more I do that, the more I realize we don't need it. Mind you, I still kept real sugar in there, but it was organic. Does that count?

What I did was follow this recipe, but switched out things to make it gluten, soy, and dairy free;
http://www.foodnetwork.com/recipes/dave-lieberman/apple-crumble-recipe/index.html.
Admittedly it is not the best recipe out there, but again, I do not bake, and it was real easy to follow.

I used Bob's Red Mill Gluten Free All Purpose Flour, and I used their Gluten Free Oats too. I also took the butter out and used Earth Balance dairy free and soy free "butter".

Otherwise I followed it.
What I would change is that I would add more Cinnamon. And not only Cinnamon. I would also add Nutmeg and maybe even Clove.
The amount of Cinnamon that this recipe called for was not enough.
I also took the nuts out of the recipe and replaced them with shredded Coconut.

It was really quite perfect when all was said and done. I also added a big scoop of So Delicious Vanilla Coconut Milk Ice Cream.

Let me know if you make it and what you change along the way! Hey! Don;t forget to add the love too!