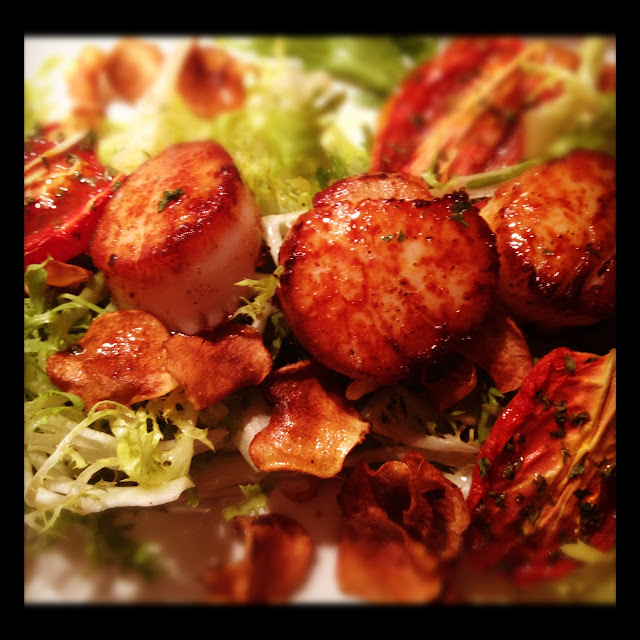 Yesterday I woke up and wanted Scallops. Not sure why, but it was one of the first things that popped into my head as I was waking up. So I got out of bed, pulled myself together and headed to The Lobster Place in Chelsea Market. I got 6 large scallops, and it made 2 salads.
On the way there I decided that I was going to make a salad, because I also wanted to slow roast some tomatoes. I decided on a couple small heads of Frisee for the texture, and my mind went to bacon for some crunch. I thought it could be a play on the classic app of bacon wrapped scallops, but the problem was I didn't actually want bacon. So as I was shopping for the produce at the Manhattan Fruit Exchange, I saw sunchokes and thought that I could make chips with them for that crunch I was looking for from the bacon.
I got home and started to work on the tomatoes. I never put much thought into the process, and it wasn't until I was home that it dawned on me this was going to take a long time to make. Not the whole salad, just the tomatoes.

I was trying for a home made sun dried tomato kind of thing, and  I succeeded, but it took 4 hours.
So when you make this keep in mind that you need to start 4 hours out, or make the tomatoes a day or 2 prior. (If you do make them a head of time, you should store them in Olive oil to keep them fresh)

For the tomatoes I took 3 plum tomatoes and cut them in half. I put them cut side up on a backing sheet and sprinkled them with a little sugar, salt, and chopped parsley. Put them in a 275 degree oven for about 4 hours. When they have no liquid left in them they are done. If you do want to speed up the cooking time, use smaller tomatoes. Even cherry tomatoes would work.
While the tomatoes are roasting, you can fry up the sun chokes. I heated up about an inch of grapeseed oil in an cast iron pan. While that was getting hot, I used a mandoline and sliced 3 sunchokes super thin. I rinsed the slices off and patted them dry. Then when the oil is hot drop in the slices. I am not sure what temperature the oil was because I don't have a thermometer, but you'll now that it's hot enough by testing. Toss one of the slices in and if it starts to fry, it's ready.
Once the sunchoke slices have turned golden, take them out of the oil and place them on a paper towel to drain, and season them with salt.

When your tomatoes and sunchokes are done, it's time to make the scallops. You can use the same pan as you fried the sunchokes in. I poured about 3/4 of the oil out leaving a  thin layer for the scallops to sear in. You want to get the pan really hot, so turn it on high. While the pan is heating up pat your scallops dry with a paper towel and then season with salt and pepper.
When the oil is hot enough, place the scallops in the pan. Be careful though because the oil will splatter.  The scallops will only take a couple minutes on each side to get a nice crust, and cook all the way through. When they have cooked, remove them from the pan to cool.

Now its time to dress the Frisee and make the salad.
I used a basic lemon vinaigrette. 1 part lemon juice to 3 parts olive oil. Salt, pepper, garlic powder, and a little chopped parsley. I poured most of it over Frisee and saved a little to pour over the finished salad.
Then on a plate place some Frisee down first. Then place a tomatoes and a few scallops. I did 3 of each. Then add a few sprinkles of the sunchoke chips. Pour a little more dressing over each plate and you done!

This is another perfect summer recipe, and if you like scallops you are going to love it.
If you are looking for a great wine to pair with this salad check out this rosé. One of TBFB's favorite family members, "De Wine Guy" Alessandro de Garcia of Botella & Co, has this to say about a perfect companion to my scallop salad, and more!

Anyone who has ever been mildly interested in my 5-year wine writing career knows how much I dig pink wines. Not the sweetish white-zin types (not that there is anything wrong with them), but the zesty, fragrant, tart, refreshing, spicy, food-friendly and, most importantly, dry pink wines, otherwise known as rosés, rosatos or rosados, depending on the country of origin. My first rosé of the season is one of my favorites and one of the best in my opinion on the market around $12. DOMAINE HOUCHART. This Cotes de Provance rosé in its salmon pink color is sourced from 5 different grape varieties (Grenache, Cinsault, Syrah, Cabernet Sauvignon and Mourvedre). This rose has inviting aromas of dry cherry, cinnamon, clove, roses and a touch of white pepper. It has bright citrusy acidity with a def touch of cantaloupe and spicy nutmeg. Lively, fresh and dry, this one has good structure, concentration and intensity enough to satisfy you red wine drinkers out there. Serve not too cold, between 50-55 degrees with any grilled meats, ham, salmon, scallop salad, pizza, mild cheeses or Asian dishes. Cheers... 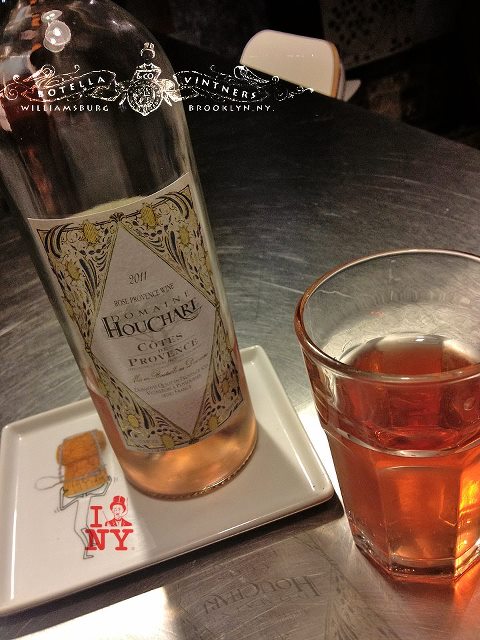 I hope you guys love the salad! Please let me know if you make it.
And stay tuned for a lot more wine advise from "De Wine Guy"!!