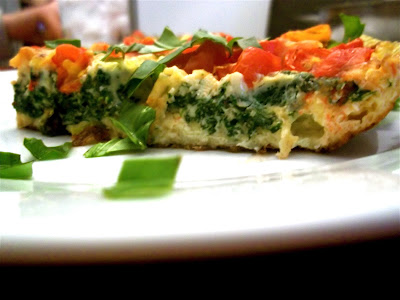 This weekend was Anthony, one of P2's closest friend's bachelor party. So while they were off to do what bachelors do, Kristen (the bride) and I had our own party!
Ok... so drinks at Vynl in Hell's Kitchen and Saganaki at Uncle Nick's might not seem like a "party" per se, but to us its pretty close. 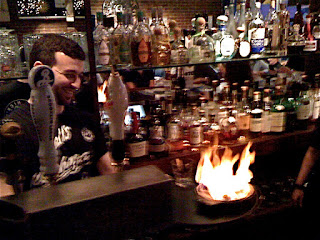 If you do not know what Saganaki is, it is amazballs! Greek cheese, fried, and then doused in liquor and lit on fire! Then the fire is put out with lemon juice. It is sinful, delicious, and once you have it you can't stop from wanting it all the time. We actually ordered a second round!
The picture to the right is our second serving being sent over. Just seeing it makes me want to hop into a cab and rush to Hell's Kitchen with a lighter and half a lemon!
Anyway...
So as we knew this weekend was our little slumber party, Kristen had emailed me a recipe from WebMD  that she thought might be nice to make for brunch the morning after. It looked great so we decided that we would go to the grocery store when we woke up and make it.
As the plan went into motion we were at the store and realized that they had no leeks. Not a huge problem, but I was excited to use a leek. I haven't since school.
The frittata was after all a Leek Spinach and Tomato Frittata, so we were a little stuck. We decided to replace the leek with green onion. Its like a mini leek after all.
So ingredients all in hand we headed home to get started and see if this "healthy" frittata was going to make up for the 16 pounds of flaming cheese we had last night, but still be good! 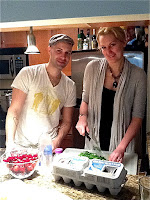 The cooking was fun. Of course we may have had a little brunch punch too, just to keep things interesting.
But don't judge.. it's brunch after all.
We followed the recipe pretty closely. Aside from the green onion and a bit more cheese than was called for. Other than that measuring cups were out.
As you know I am not one for recipes, but it was actually not too bad to follow it. I also think that it might actually be easier when cooking with someone else to following a recipe. Leaves out any questions or any fault on anyone should the meal suck!


So here is the recipe; My notes are highlighted.

Preheat oven to 500’
Warm the butter in a saucepan (preferably non stick) on medium heat, add the sliced leeks and sauté until they begin to caramelize, about 10 minutes.
In a large bowl, whisk the eggs, egg whites, hot sauce and milk. Incorporate some air and break them up, whisk about 4 minutes, yes, your arm will start to hurt. Add a good pinch of salt and pepper.
Squeeze as much water possible out of the steamed spinach, give it a rough chop, and squeeze again.
Distribute the leeks in the pan, as this will be your frittata base. Turn the heat back to medium and pour the egg mixture on top. Scatter in the chopped spinach and the shredded cheese and allow the mix to sit for a minute. Use a spatula to lift up the sides.
As it starts to firm up, lay your tomatoes on the top, cut side up. Put the entire pan into the oven on the top rack. Let it bake for about 8 minutes and check. It should be set, but still have a little give when you push on the middle. Remove and let it cool a bit before serving. This recipe goes well with some fresh chopped basil and a dollop of Greek yogurt. 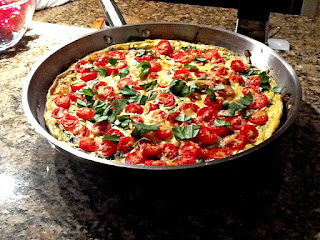 I guess we skipped the Greek yogurt too. Not sure I would have loved that.
And like I mentioned we did add a little extra cheese. What we did was sprinkle a little on top over the tomatoes. Once that initial 8 minutes of baking was up, we broiled the frittata until the top got lightly browned.

It was really really really good! We loved it. And to my surprise, there was enough salt. I was pretty concerned that there was not enough salt in the recipe, but I guess between the butter we used and the extra cheese it was totally fine.

Let me know if you try it. It would be really easy to switch it up in so many ways. I would love to hear your twist on it!
And don't forget to add the love!

Anonymous said…
Had so much fun eating, cooking and drinking with you this weekend! So glad you came grocery shopping with me, I would have never known what ingredients to substitiute without you!
The frozen grapes were a great garnish too!
May 15, 2011 at 2:02 PM

Joanne Cucinello said…
So colorful and yummy looking . . . I'll bet it was delish! Thanks for a great recipe, since frittatas are one of my favorite dishes, especially for brunch!
May 15, 2011 at 5:01 PM