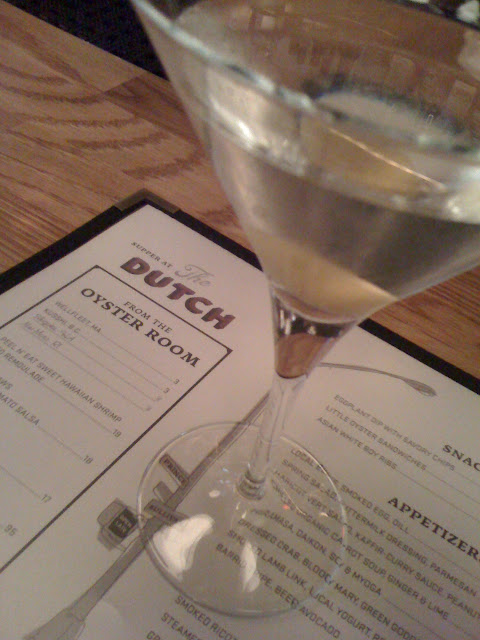 I am not exactly sure how long it has been, but I am guessing it has been about 2 years since the Cub Room closed it's doors in Soho for good.
Since then I am sure I can't be the only one who's missed it. However, I am sure that I am not the only one that was excited to see what was coming next. The restaurant space is big and cozy at the same time. Someone with the right idea could really do something amazing with this space.
After years of seeing the location closed up with brown paper covering the windows, it was great to hear that the people from Locanda Verde were moving in!! This new spot will be called The Dutch.
With little effort it was clear that people were excited. It took 3 seconds on Google to find a ton of info on this upcoming venture by Andrew Carmellini who we all love because of how amazballs Locanda Verde is.
So, myself and one of my favorite partners in food crime, Nicole, decided to sneak a couple of early seats at the bar this passed Saturday to see if it is living up to the hype.
I want to back up a little at this point...
My regular job requires me to call restaurants regularly. For all sorts of reasons.
I have called The Dutch 3 times before going to eat there. The first time was to ask if they were officially opened for business. The guy who answered the phone seemed confused. He didn't reply for a few seconds and then said "um... yeah. I mean... we are open." I thought, OK, maybe I didn't word my question properly and I accepted fault.
The second time I called I asked if they had started their weekend brunch service. The web site says that it's "coming soon", so I wanted to check before I pass along incorrect information to a client.
The girl who answered the phone (during brunch time) stumbled with her words and said "um.. I guess, yeah, we have brunch".
Then, while we were on our way there to eat, I knew it was on the early side so I wanted to make sure they had started their dinner service. Again I called, and again I was met with ums, and unsure answers to basic questions.
-Not having a good feeling at this point.-
When we walked in we were greeted by a team of young hipsters. Well not greeted so much as observed and dismissed. Obviously the people I have been talking to had gathered to welcome people in person as they do on the phone.
One girl stepped out of the pack to smile and confidently say "Hello!"
We told her we just wanted to sit at the bar and she directed us accordingly. If you are the cute girl with long hair and big 80's mom glasses that helped us, thank you !
In reading about what this place was going be like, I think the main theme of the menu was that it was going to be fun and eclectic. Described as "American" so that anything could go, and when we saw the menu that is exactly what it was.
Nicole ordered a glass of wine and I got a Martini. The bartender was great. Personable and attentive.
He gave us a little more time and then we discussed food.
We went light to start. I got a mini oyster sasandwich, and we both ordered Asian Whiteboy Ribs. When I asked what that is, the bartender told us that it is just classic Chinese style spear ribs made by a white chef. 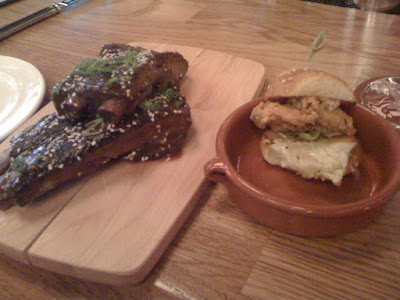 Soon after, the food arrived and looked perfect.
We were less than excited once we dug in. The oyster sandwich was ok. It was a fried oyster on a slider bun with tarter sauce and a tiny piece of lettuce. Not bad, but nothing to get excited about. It was exactly like it sounds.
The ribs were good, but they came out cold and a little dried out. Flavor was nice. A little sweet and sour. If they were not obviously old, they might have been awesome!
After that underwhelming first course we decided to not continue. We were off to a bad start and decided to end it there and try again another night. Once we have time for proper entrees and such we are going to return.
As for now though, I will not be rushing back!

If you have been let me know what you think! I would love to hear that you loved it and I can get excited to go back! Or let me know if you have had a awkward conversation with a host or hostess! :)