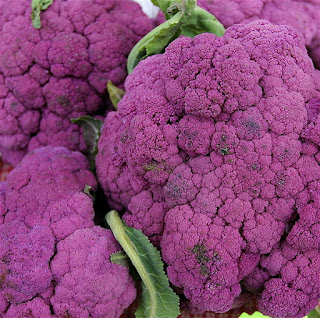 So last night I had no idea what to make for dinner but headed off to Chelsea Market anyway just knowing that light and healthy was the mark to hit. It had been a really long time since we had Filet Mingnon and I was thinking that with some sauteed spinach would be great. The butcher however had other plans for me because by 6:15 he was almost out of all beef. Only thing left was Rib Eye, and as lean as he was trying to convince me it was, I have never had a Rib Eye that wasn't delicious because of the fat! I skipped it.
So off the the fish monger! They were looking pretty picked apart and out of a lot of things too. I decided that the old standby, Tilapia was winner.
Seasoned and grilled. How could I go wrong. Now off to the Manhattan Fruit Exchange for some vegetables. I still wanted a bit of spinach, but maybe something else with a bright color. I walked around and decided I would grill some corn too. I know it really simple but I could use simple these days! Not to mention cheap!!!
So while in line to pay the purple cauliflower caught my eye. I knew I already had plenty of food but it was a small head and I just really wanted it!
I walked home and started to cook. There ended up not being a lot of cauliflower yielded from the head that I bought which is great because I already had so much food.
I simpley cleaned it up, cut it up, and threw it in a pirex with some salt, pepper and olive oil. I had preheated the oven to 425 so I put the pan in and set the timer for 20 minutes.
Everything else came out great. The purple cauliflower ended up taking about 28 minutes till it was tender but still maintained some of the crunch. The plates looked pretty so I took a pic and put it on Facebook. 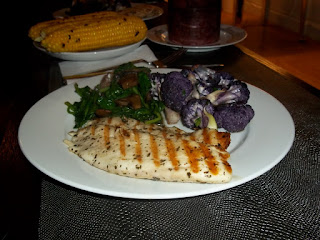 It got quite a response so I figured I would learn a little about purple cauliflower and share with you.
Turns out there is not much to know.
There are different varieties of cauliflower and one just happens to be purple. There are many of the common white kind, but also green, and yellow ones as well.
The purple is caused by the presents of a very powerful antioxidant called Anthocyanin. It's the same stuff that makes some cabbages red and blood oranges red. It can also be found in red wine.
It's super healthy and fights off the free radicals. And living in NYC that a huge plus to have in our diets!
So thats the short story of purple cauliflower.
You can use it however you like to make cauliflower. The difference in taste is very very minor. If heavily seasoned I am sure it wouldn't even be detectable!
Hope you all try to add a little color to your meals. The more colors, the more healthy the meal will be!!
XOXO
-P
(PS. Lili, I hope this clears up any questions you might have had!)

Anonymous said…
I love your food blog Paul, you need keep doing this and it will lead you to something, if you love it, it always works out.

Recipe girl Doreen said…
What a smart way to plan your meal in a few minutes. I see you don't take Filet Mingnon much but to us it is almost a staple. We do different types - with chipotle chiles,with pepper(our Mexican style) and egg yolks( for myself only) the rest of the family don't like it.

I looked at your finished meal pic. Real cute. What did I see in the background? It looks like a corn cob?