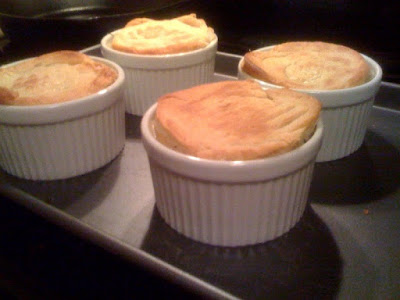 So I was online a couple of days ago, starving as usual and I was asking people what I should have to eat. A little while later my friend Tracy chimed in with the brilliant idea of chicken pot pie. Now this was not a shocker to me because that seems to be a standard response from her. That or rump roast! (That's actually a private joke for her to read!)

So this time as soon as she suggested it I was hooked on the idea. It's was about 30 degrees outside so I wanted something to warm us up. We just got back from vacation so I didn't want to spend $100 at the grocery store. It was the perfect idea!! I put my boots and scarf on and headed to the store.
(As a side note. I made this recipe for 4 (four) 8oz ramekins. It can also be made in a medium sized casserole dish as well)
I picked up all of the usual suspects that we all love in a pot pie:
*Carrots (I bought a bag of the baby ones to give myself less work to do)
*Celery
*corn (Large can)
*peas (frozen)
*new potatoes
*one onion (medium size)
*3 chicken breasts
*one box of chicken stock
*fresh thyme
*one can of Pillsbury dinner rolls (for the crust)
To make this you will also need 5 tablespoons of butter and 4 tablespoons of all purpose flower. And of course salt pepper and olive oil.
When you are ready to start heat the oven to 350 degrees.
First thing you want to start is your potatoes. I would get one of the bags they sell. You can always use the extras for breakfast!
You want the pieces pretty small. Take a potato, cut it in half, then cut each half in half, and then those pieces in half again. That should leave you with small pieces about a quarter of an inch each.
In total you will want about 2 cups of the diced potatoes. Next take the potatoes and put them in a large pot with half filled with cold water and set on the stove. You want to put them over high heat and par boil them. That means cook them about half way.
While the potatoes are cooking, chop the onion, carrots and celery to the same size, and about the same amount each as the potatoes.
When the potatoes are half cooked drain them. Let them sit in the colander. Wipe the same large pot clean and place it back on the stove. Put the heat at medium high and add some olive oil to the pot.
When the oil is heated put the onions in and let them sweat a bit. Then add the potatoes.
When they are hot add the carrots.
When they are hot add the celery.
When that is all hot add the corn. (whole can)
You will notice that I am saying hot, and not cooked as a way to time the veggies. They will all be cooking in the oven, so you don't want everything too soft before that. Keep a bit of a bite to all the veg before baking to ensure they keep their integrity when you are ready to eat!
While all the veg are doing their thing, dice up all the chicken and leave it to the side.
When all the vegetables are ready, take them out of the pan. Then add a bit more olive oil and cook the chicken. Like the veg you want to remember that the chicken will be in the oven later, so you don't want to cook it all the way through. It will finish cooking in the oven. So cook the chicken until it is just before done. While it is cooking add a bit of salt and pepper. When it is ready, remove it from the pot, and leave it to the side along the veggies.
With the pot back on the heat add 4 tablespoons of butter and let it melt and come to a sizzle. Then add the flower. Whisk it with the butter until it forms a paste (a rue). Keep stirring it for a little bit until the flour is cooked. It should only take 2 mins. The flour will start to smell a little nutty, that's when it is ready. Now add the whole box of chicken stock while whisking. Combine all of the rue with the stock until there are no lumps. This is going to be the yummy sauce that the the veggies and chicken sit in under the crust...
OH YEAH... The crust!!!
So while your sauce is coming up to a boil (stir it often and keep an eye on it), get out your tube of dinner rolls. They come in a tube of 8. Take them out in sets of 2 and kneed them together into flat circles large enough to cover your ramekins. (If you are making this in a casserole, you just want to make sure that you make the rolls big enough to cover the majority of the surface of the casserole)
Put them on foil and bake them for about 10 mins.
You don't want them fully cooked. Just starting to get brown.
Back to your sauce......
It should be boiling and getting thick. At this point add salt and pepper to taste, and a bout a table spoon of the thyme.
You can start getting the pies together now.
Add a handful of the frozen peas to your veggies and stir them up. Fill the ramekins a quarter way each with the mixed veg. Then add the chicken. About another 2 quarters of the way up in the ramekin.
When the sauce is thick enough to coat the back of a wooden spoon it is ready too.
Fill each ramekin up with the sauce and place a "roll" on top.
Melt the remaining tablespoon of butter and brush the top of each pie with it.
Put them in the oven and bake for about 15 minutes. The tops should be nice and golden and the inside should be bubbly!
Jeez..... that was a lot to write, and a lot to cook! Clean up, have some wine and eat your dinner. I suggest wearing your PJ's and eating with your favorite person. That's how I did it!! 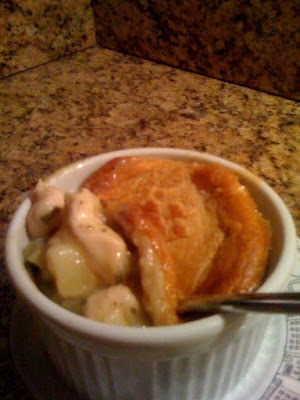 Good luck with this. It's really not that hard, and a lot less work than it seems in writing.
Don't forget to add some love!!
XOXO -P

SIRPAUL said…
Ok this is unbelievably delicious. I know. I licked the dish when it was done and the we watched the rest of Celebrity Rehab with Dr. Drew and I was totally satisfied!!!
January 15, 2010 at 3:10 PM