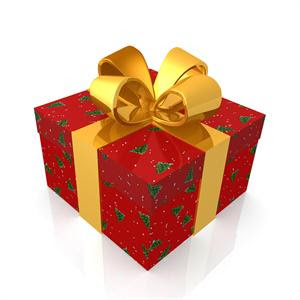 If you read my blog at all, you know that a have a deep love affair going on with the restaurant Barbuto in the West Village. So as P2 and I were finishing up our Holiday shopping, we were starving and knew there was one sure bet for a late lunch!!
We threw our hoods over our heads and braved the wind, for what proved to be another amazing lunch!
Besides the food and wine being spectacluar, I was given my first Christmas surprise from P2. After we were stuffed to the heart, he asked me to get my stuff together and meet him in front of the restaurant. I obliged and waited for him to show up. While looking through the front of restaurant I noticed P2 was inside speaking with Johnathan Waxman. Celebrity Chef and owner of Barbuto!!
You might have heard of him or evern have seen him on Top Chef. If not here is a small blip from his online Bio.

"Jonathan Waxman first stepped into the culinary scene in 1970 when he decided to retire from his career as a professional trombonist to enroll in the La Varenne cooking school in Paris. There he was trained and inspired by some of the most notable three-star chefs. Jonathan returned to California to define his newly found voice within the culinary community.
After working in renowned kitchens such as the prestigious Chez Panisse alongside Alice Waters and Michael's in Los Angeles, Jonathan took his west coast culinary style east and opened Jams in New York City. With the likes of Julia Child, James Beard, and Wolfgang Puck frequently visiting his new restaurant, Jonathan established himself amongst the most prominent names in the U.S. culinary scene. Soon after, Jonathan opened the famed Washington Park. Today, he is chef-owner of Barbuto in New York City's West Village as well as West County Grill in Sebastopol, California.
In September 2007, Jonathan published his first cookbook, A Great American Cook, a culmination of his culinary vision and love for creating bold flavors with simple ingredients. Jonathan strives to show how fun cooking can be and that there is a great American cook in even the most amateur chef.
In November 2007, Jonathan will open an outpost of Barbuto on the island of Guadeloupe in the heart of the Caribbean, where he will source all ingredients from local purveyors.
Aside from his duties in the restaurant world, Jonathan finds time to work closely with City Meals-on-Wheels, March of Dimes, and the American Cancer Society. He also serves on the American Airlines Chefs Conclave with fellow contributors including Paul Prudhomme, Bradley Ogden, Jasper White and Dean Fearing. For his contributions to the culinary world, Jonathan was named one the most influential Americans by Esquire magazine. He resides in Manhattan with wife and three children."

So as you know I love rustic and fresh over the fancy and over exagerated, so I am naturaly drawn to the culinary style of Chef Waxman.

P2 finaly came out after his brief interaction with the chef and we started on our way. He was carring a bag and asked me to look in it...
I opened it and pulled out Chef Waxman's cookbook "A Great American Cook". 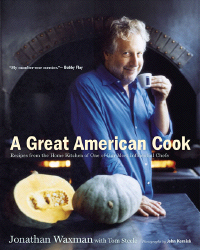 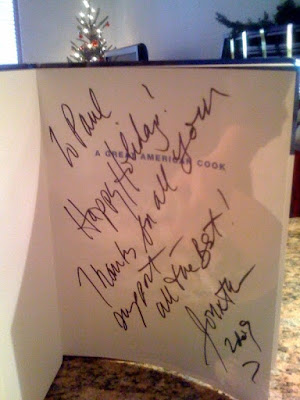 He thinks I snoop around too much, but P2 got me with this one, and made my day! It is one of my best gifts ever!!! Not just because it is Chef Waxman's book, but because of the thought behind!

Merry Christmas Eve everyone!!! Get ready for some great stuff from tomorrows dinner!! We are deep frying a turkey!!