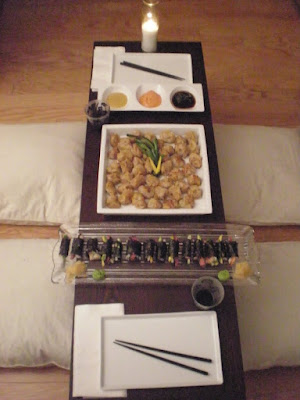 In honor of my new readers over in Japan, P2 and I decided to make a little Japanese food for dinner last night! Well, it was our version. What we did was take the classic methods and switched them around and made them our own! In honor of that way of cooking, I will not be giving you any recipes in this entry. I will definately tell you what we did, but I want to inspire you to take this opportunity to play around in the kitchen and have fun like we did!!! There are NO RULES!!! I will tell you the basics that you will need and then the rest is up to YOU!
Sound fun???
First lets start with the Dumplings!!
As you can tell we made a whole mess of them! At first is was a little tough, but as our fingers got used to working with the wrappers it got easier. Plus we weren't really trying to accomplish a specific look. We were really just making sure they were sealed up well!! 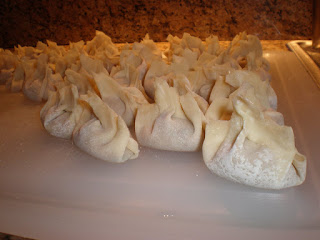 Ours were filled with P2's choices of ingredience. He has a bit of a sweet tooth and well as a love for spice, so we had a nice ballanced dumpling flavor wise. We chose grownd chicken, dried cherries, fig jam, minced ginger, minced garlic, chili powder, diced water chestnuts, wasabi paste, and tomato paste. I also believe there was a bit of onion as well. I will update this again if I was off on anything. P2 just eyeballed everything, and we went for it!!!

We had the store bought wonton wrappers, so there was no fuss with making dough. We put about a teaspoon of meat in the center of the wraper, brushed the sides with an egg wash (egg and water whisked together), and then made what looked like litte purses out of them. Basicly just bringing all sides up to the center and pressing them together. We made it up, so just try a few and see what works for you. Like I said before it it just important that the meat is sealed in. Even if you just make it look like a ravioli that is fine! It will taste the same! :)

When we were done I covered them with wet pater towels and putthem in the fridge until we were ready for them!
Next we started the sushi! With a lot of help from the store, I think this was the funest part of making dinner. There is a genious new product out by Annie Chun's. It's the rice and seaweed wraps all ready for making sushi. 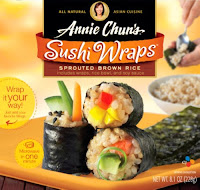 All you do is add what you want in the middle and roll it up!! They come with brown or white sticky rice. All you do is nuke the rice as directed for 1 minute and your ready! We chose some fun things, and some unusual things too! 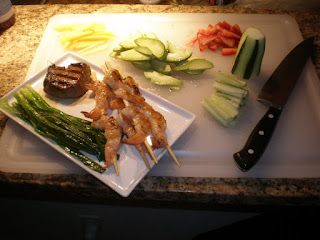 First we wanted some yellow tail tuna, but saddly we couldn't find any at Whole Foods. Sadly we found nothing sushi grade there at all. So it was on to plan B. That was Filet Mingon and Shrimp! (of course we cooked them!!) We also julianed (cut in thin strips) cucumber, mango, avocado, and grilled green onions. We also has sliced strawberries and chopped cilantro! I mean.. really!!??? Could it get any better???
One really important thing that I need to tell you before I forget is to remember to keep a little bowl of water next to you. You are going to want to dip your fingers into the water before you touch any rice, otherwise the rice will stick to your fingers and never make it to the seaweed.
Now.. the fun part.. take a piece of the seaweed, put a little bit of rice on one end, then lay a few pieces of whatever you chose you would like in your sushi on the rice, and roll it up. Thats it!!
Sushi is ready to eat. 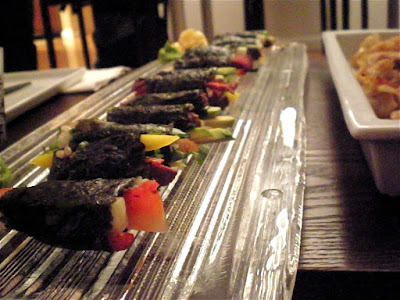 Now get a pan, heat it to medium, fill it about 1/2 an inch with canola oil and fry up the dumplings!!! once they are golden on each side the meat should be cooked through and the dumplings will be ready to eat!
Only thing left to do is get some dipping sauces for the dumplings, grab some soy sauce for the sushi, wasabi and the pickled ginger! If you are making your own sauces might I suggest a little mayo mixed with chili sauce, and some dijon mixed with agave nectar! Oh yeah.. Ponzu is a great thing to dip in too!!
I hope you try this with your significant other or some friends. It really was so much fun!
Let me know how is goes!
XOXO
-P

SIRPAUL said…
This was sooooo much fun to make with you!!! I think it's the proudest I've ever been of a meal both flavor and presentation wise...We ate like kings and it was still relatively healthy!
November 7, 2009 at 9:04 PM