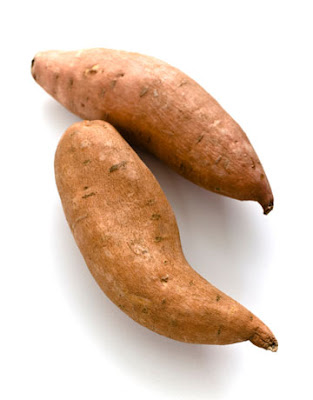 In case you were wondering what my favorite thing in the whole world to eat is... Well You guessed it!
I LOVE SWEET POTATOES!!!
There really is nothing bad about this thing!
It's flavor, texture and color lend itself to so many uses, and they are one of the best foods you can eat!

So here are the nerdy facts:
The sweet potato (Ipomoea batatas) is a dicotyledonous plant that belongs to the family Convolvulaceae. Amongst the approximately 50 genera and more than 1,000 species of this family, only 1, batatas is a crop plant whose large, starchy, sweet tasting tuberous roots are an important root vegetable (Purseglove, 1991; Woolfe, 1992). The young leaves and shoots are sometimes eaten as greens. The sweet potato is only distantly related to the potato (Solanum tuberosum). The softer, orange variety is commonly marketed as a yam in parts of North America, a practice intended to differentiate it from the firmer, white variety. The sweet potato is very distinct from the other plant known as a yam (in the Dioscoreaceae family), which is native to Africa and Asia. To prevent confusion, the United States Department of Agriculture requires that sweet potatoes labelled as "yams" also be labelled as "sweet potatoes"
The genus Ipomoea that contains the sweet potato also includes several garden flowers called morning glories, though that term is not usually extended to Ipomoea batatas. Some cultivars of Ipomoea batatas are grown as ornamental plants.
This plant is a herbaceous perennial vine, bearing alternate heart-shaped or palmately lobed leaves and medium-sized sympetalous flowers. The edible tuberous root is long and tapered, with a smooth skin whose colour ranges between red, purple, brown and white. Its flesh ranges from white through yellow, orange, and purple.
~Blah blah blah...

OK. Here is what I know.
They have a ton of fiber, a lot of complex carbs (those are the good kind), they're loaded with vitamins and minerals like vitamin A, and they are amazing smothered in butter!
Most interesting thing I learned about them was that you can eat the leaves that this root produces, and check out the pretty flowers that they make! 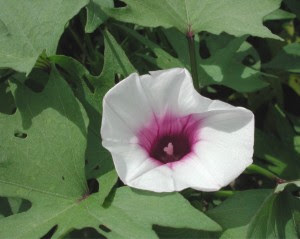 My new favorite way to eat sweet potatoes are to slice them up and bake them.

First preheat your oven to 400 degrees. I cut about 3/4 inch discs out of 2 or 3 potatoes, depending on they're size and toss them onto a baking sheet. I pour a tablespoon or so of olive oil over them, and then generously salt and pepper them. Now at this point you can add anything else you would like. I have tried cinnamon, Cayenne pepper, and once even cumin. It's totally just about what you like. You don't even have to add anything if you prefer. Then mix them all up with your hands to make sure all the potatoes are evenly seasoned. Now just arrange them all so that they are laying flat and through 'em in the oven for about an hour. Turn them over once about half way through.

The best part of these is that they get a nice crispness to them the longer you leave them in the oven. So you can let them go longer than an hour, but be careful not to let them took too much longer because then they will get too dry!

Enjoy them and don't forget to add the love!!!

kristenj said…
I heat sweet potatos! I totally agree they are their best as french fries. Who doesn't love guilt free french fries?!
October 24, 2009 at 5:32 PM