October 20, 2009
So this Sunday my cousin Tina and her husband John came to The City from Connecticut to have brunch at our new apartment.
It had been so long since we had seen them and we wanted to make it special for them so I enlisted the help of the guy who kills breakfast and brunch every time... Sirpaul!!
After we spent about half an hour in Whole Foods, I knew we were leaving with a great plan!!
We decided to make French Toast out of challah rolls served with a pear compote, and fresh mascarpone whipped cream! AND a side of scrambled eggs with Gouda! It was AMAZING! 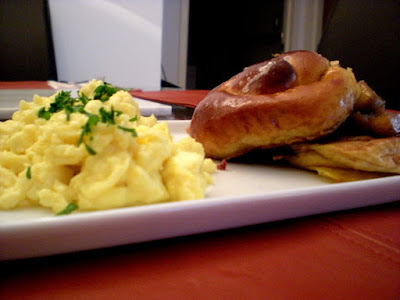 There were so many ingredients for this dish, I don't want to go into all the details or this will be the longest blog ever. So I will give you a quick gist!
The French toast was pretty traditional. We cut the rolls down the middle and soaked them in the traditional egg bath. However P2 added sweetened condensed milk and evaporated milk to the mix!! Now we made a lot, so the egg bath was 6 eggs which took 1/2 a small can of the condensed and 1/2 a large can of the evaporated milks. The rest is up to you. P2 chose to add vanilla extract and cinnamon as well. Then just fry them up in a skillet!
The compote was 4 diced pears, 4 table spoons of butter, and 4 table spoons of brown sugar. Cook that down on medium heat in a sauce pan until the pears are soft and the sugar and butter are nice and bubbly! You can also add a pinch of salt along the way to bring out a little more sweetness!
The Whipped cream was really simple! I whipped 1/2 a pint of heavy whipping cream with 2 tablespoons of mascarpone cheese! Whip it until the cream gets nice and firm! Not too firm though.... that would be called butter! :)
We assembled it to look a little like deconstructed sandwich and plated it up with the scrambled eggs!! It was delicious!!!
P2 and I also added an Espresso Martini to the mix too!! 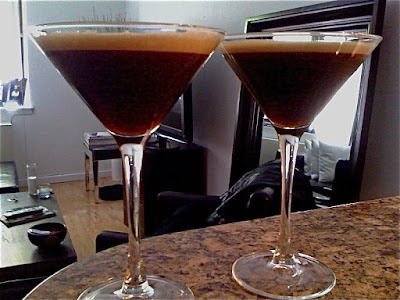 This is a recipe given to us from our friend Johwell who bartends over at Cookshop. He is an amazing person who is trying his best to make this world a better place by teaching people how to respect themselves no matter who they are or where they come from! ! Check out his website. http://negusworld.com/, and then check out his martini!!
For 2 martinis you want to put 2 shots of espresso in a martini shaker with ice. Then add one shot of vodka and one shot of Kahlua. Shake it up really well and pour!!!
Oh.... and of course, remember to put a little love in everything you make! It really will taste better!
XOXO
-P

Sarah said…
I am so making brunch this weekend!I like the way you cook--Great inspiration without the constraints of rigid recipes :)
October 20, 2009 at 10:59 AM

Paul Salvatore Petersen said…
Thanks sarah!!!
That's exactly the point! I want people to realize that cooking is not all about rules and guidelines.

It's about learning a technique and then making it your own!