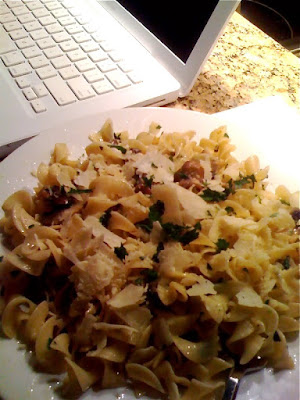 So I left work a bit early tonight. Around 10 p.m. and then went and had a martini with my friend Justin Law at a new place called Bar Tini. It is where the old 10th Ave Lounge used to be. They did a really cute job remodeling it and I wish then luck!
But I got home and I was starving!
The fridge was sparse so I did a quick inventory and assessed the situation. Seemed like I would be able to do something yummy after all!
I have baby portobello mushrooms left over, parsley, garlic, olive oil, thyme and egg noodles.
Sounds like dinner!!!!!!
So I put a pot of hot water on!
Then I thick cut about 7 of the baby bellos, one clove of garlic, and threw them in a heated saute pan with a few pinches of salt and a few turns of olive oil around the pan.
Next the water was boiling so I added about a cup of the egg noodles and lots of salt.
So my noodles were boiling and the mushrooms were sauteing, I added a teaspoon of thyme and a huge pinch of parsley to the mushroom pan, and turned it off. By this point the mushrooms are done and can hang out for a bit. The pasta has about 3 mins. left so atI pulled out my plate and turn my mac book on!
Noodles are done, so I turn the shrooms back on low, and drain the noodles almost completely. About 98%. I wanted some starch left in the pot. I poured the noodles directly into the mushrooms and mixed it all up. Once it was mixed, I hit it with a bit more parsley, a bit more salt. A lot of parm, and a few more drops of olive oil!
Damn!
Damn!
Damn!
This is SO easy I could do it late night after a martini!!! BUT so good your friends would love it anytime!!
Whooopps... I just realized I forgot to add some red pepper!!!
Oh well, next time!!!
XOXO
-P

SIRPAUL said…
I'm on a little diet right now (cause I need to drop a couple of lbs for a video shoot) so I couldn't join our Sexy Chef in enjoying this late night meal but a frickin' tsunami couldn't keep me from having a taste! The whole apartment smelled *amazing* and this dish took him 10 mins tops! It was out of this world!!! ....Diets suck!
October 23, 2009 at 6:56 AM