I has been a few days since I blogged because I have been a little busy, so since I had the afternoon to myself I decided to get back to it! SIRPAUL and DJ Alex Lauterstein were working in our apartment, so I picked a place I have heard was amazing and went there to do my first restaurant review! I decided on the very popular 5 Napkin Burger. Time Out NY voted it "best new burger" in it's Best New issue, so it has to be good right??? Answer: Not so much. I mean it wasn't terrible, but I will not be rushing back there any time soon. Probably never actually.
I decided to sit outside. Mistake number 1. I just ended up getting a little less attention from the waitress than I would have preferred to have. I looked over the menu which is quite diverse. They have everything from ahi tuna burgers to blackened shrimp salad, to lobster rolls. It looked very promising. My better half, Paul, always tells me that I try the weird things at new places instead of going for what I know is going to be good, so I took his advice this time and just went for the classic burger. Well, 5 Napkin's version of it anyway. It was 10 oz chuck, gruyere, caramelized onion, and rosemary aioli, on a soft white roll. And it came with fries. I also asked for some pickles and a glass of Cabernet.
The food came and I was instantly disappointed. 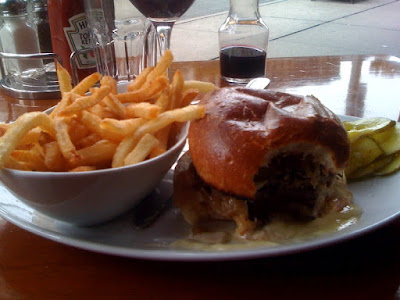 The burger was a lot smaller than the bun. That always annoys me. Also, it was so sloppily put together. I understand that this is a burger which should require me to use 5 napkins before I am finished with it, but they should keep in mind that we eat with our eyes too! I already could tell there was no love in this burger!
My bun was disappointing too. Not terrible, but not what came to mind when I read "soft white bun". I was expecting something more substantial. Anyway.... after removing about 290 of the what seemed like 300 large slices of pickles from the top of the meat, I put the top of the bun on my burger and took a big bite. The cheese had become very gooey and I was excited to bite into the part that looked the best, but it turned out to be a big glob of the aioli. In fact it was the entire portion of aioli the chef had given me. YUCK!! who wants a big mouthful of mayonnaise?? I poked at the burger, and ate most of it, after removing most of what they had put on it and replaced it with dijon mustard. I also ate my fries which I did like, and I drank most of my glass of wine. Then I asked for my bill.
The bill came and it was wrong. I was charged too much for my wine, but the waitress took so long to come back, I decided not to say anything and just give her my card. Then I was off to Henri Bendel's and I left with the urge to become a vegetarian again!!
On my scale of 1 to 5 , 1 being the best and 5 being the worst, I would give this place a 3. But hey, other people I know love it so maybe you should still go check it out for yourself. My suggestion is to go really hungry, like so hungry you don't care what you are eating and sit inside.
OR..... go to Cafe Orlin, and get their burger. It is 10,000 times better!!!

Mike Straube said…
As a member of the "there is nothing that is not just a little bit better with a big slather of mayonnaise club", I take issue with your indictment of the meal because of the zealousness of the an obviously mayo-centric Sous. Other than that, I enjoyed your review and am anxiously awaiting the next one.

Paul Salvatore Petersen said…
Dear Mr. Straube,
There is zealous and there is over zealous. That being said, I have no issue with OVER zealous in this particular case. It's is the fact that the condiment which they so graciously decided i needed to have... to make this burger the "best" was piles onto one little section, leaving me with a mouthful of mayo and the rest of the burger feeling unrequited by said "sous".
I'm glad that you enjoyed!
October 13, 2009 at 5:38 AM

SIRPAUL said…
I have no interest in eating a "Big Fat Slob" burger unless each and every part of it is really delicious. You described your food soo well that I feel like I just ate it too... and that isn't making me feel like going there! I really like Orlin's burger and Cookshops burger as well. But I honstly wish that burgers were scaled down a bit so that you can eat thme without feeling sick afterwards. It happens EVERY time I order one! Great review!!!
October 14, 2009 at 9:45 AM

I will give it a try and let you know what I think!!